Kashmir – 1991 In between the insurgency and the exodus, Inayat finds solace in the company of Gul, a Kashmiri pundit, and Aaqib. She blooms under the eyes of her father, Maqbool – an alcoholic poet, and her mother – Wahida, who is fraught with sanguinity. They spend their days listening to The Doors in Gul’s backyard and attending Shakes-Peer’s English lessons at the school. However, as they leave behind their childhood, they realize that the future holds things for them that they have never imagined. Inayat comes face to face with loss as bereavement engulfs Kashmir. The echoing of the machine guns, the wails of her loved ones and the silence that she is bequeathed with is all that is left. The Lamentations of a Sombre Sky is the story of a skirmish with life and the perseverance in the dark times.

Usually, a book starts with its cover and title. The title “The Lamentations of a Sombre Sky” and the cover with a fading view of snowfall and a kid on its front, is exceptionally well crafted. Lamentation means a cry of sorrow and grief. The word selection for the title is wonderful. A book is judge by its cover, It’s bitter but true. And, this book scores full marks for its cover and title. 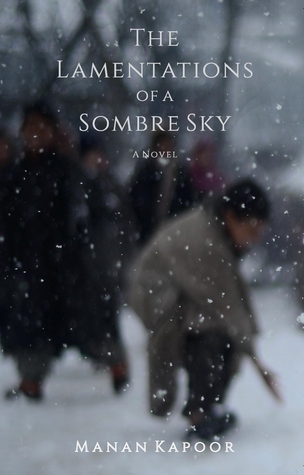 It’s a dark, emotional and deep intellectual art, written by the author Manan Kapoor. The instances happening in the book shakes a reader’s soul and pushes a person to think. At instances, you just close the book and start thinking what’s happening, metaphorically.

The poems written on the inception of each part, is quite interesting. The language used is simple and makes the novel easy to read. The story is gripping, and the plot made this novel a page turner.

The characterization of various individuals done in the book, is well drafted.

The book is an intriguing and interesting one, and surely a well crafted one, having no grammatical issues at all. (This being a problem for debut authors these days.)

Manan Kapoor, the author, has delivered a promising debut novel, in the form of “The Lamentations of a Sombre Sky” and we expect more of such stories from the author, in the coming future.

Kudos to the author for processing such a fine art and supplying it to the world. Way to go, author!

Manan Kapoor was born in Shimla in 1993. His debut novel, The Lamentations of a Sombre Sky, released in April 2016. His poems have been published in The Stockholm Review of Literature and Spilwords. He graduated from Panjab University in 2015 and is currently pursuing a Masters degree in Literature and Creative Writing at Ambedkar University, Delhi.

This site uses Akismet to reduce spam. Learn how your comment data is processed.

What if I told you that you can Re-Discover Yourself to live a life you always wanted to live?

Get my 5-day course "Re-Discover Yourself" in your inbox right away for FREE. Sign up below!

Please check your inbox - your first email is waiting there! (check Spam folder if it doesn't appear.)